Tennis-Federer better than ever but so are rivals, says Wilander 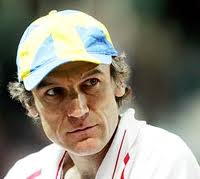 (Reuters) – The good news for Roger Federer, according to former world number one Mats Wilander, is that he hasn’t lost any of his skill and is playing as good as ever.

But the bad news for the Swiss maestro is that the opposition has improved as well and he needs to find a way past them to add to his record collection of 16 grand slams.

“There’s no question he’s better now than he’s ever been,” Wilander told Reuters in an interview. “He’s just not winning.”

Wilander said Federer’s biggest problem was that his two greatest rivals, Novak Djokovic and Rafa Nadal, were now playing at a much high level than the rivals he was beating when he was scooping up grand slams at will.

“There’s no question that Novak Djokovic is way better than the opposition he had four, five years ago,” said the Swede.

Federer won the last of his titles at the 2010 Australian Open. This year was the first time he had gone through a season without winning at least one grand slam title since he broke through to capture his first in 2003.

But Wilander, who won seven majors between 1982 and 1988, said the 30-year-old Swiss had shown he was anything but a spent force, reaching the final at the French Open this year and coming with one point of beating eventual champion Djokovic at the U.S. Open, which ended Monday.

The pair slugged it out over five gripping sets in an enthralling match that could have gone either way. Federer had two match points in the fifth set but Djokovic survived them both and won the decider 7-5.

“The first two sets again Novak were the best I have ever seen from him,” Wilander said.

“Djokovic is better this year than Nadal was last year and Nadal last year was better than anyone who ever played the game probably. They just get better, they really do.”

The Swede, who won the Australian Open and French Open three times each and the U.S. Open once but never Wimbledon, said there was no comparison between the standard of play between his era and now but Federer was still the best ever.

“I think they’re much better (now),” he said. “I think the state of the game is incredible, amazing.

“Is Roger the best of all time? “Yes, because he has 16. That’s where it all ends. Sixteen majors makes you the best player of all time.”

(Editing by Julian Linden; To query or comment on this story email sportsfeedback@thomsonreuters.com)