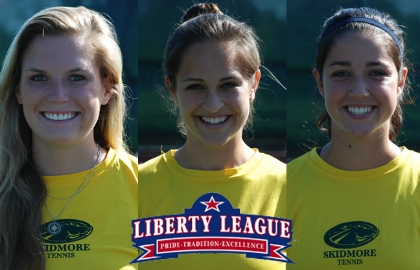 Saratoga Springs, N.Y. – On Monday, the Liberty League announced that three members of the Skidmore College women’s tennis team were recognized for their performance during the past week.

In women’s tennis, Nataly Mendoza and Lee Ford were named Co-Performers of the Week, while Alex Smith was named Rookie of the Week.

Mendoza and Ford finished fourth at the USTA/ITA Small College Doubles Championships after posting a first round upset over second seed Claremont-Mudd-Scripps.  The pair fell in the next round to eventual champion Emory.

Smith won a NY State Championship at both number five singles and number two doubles.  She posted a 3-0 record in singles and teamed withRobyn Baird to go 3-0 in the doubles draw.