The Next John McEnroe

Is Ryan Harrison the future of American men’s tennis?
By Reeves Wiedeman on August 28, 2011 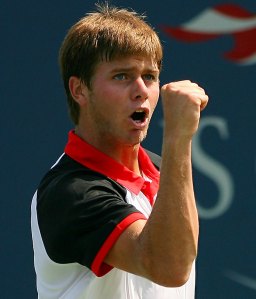 Ryan Harrison, a 19-year-old American tennis prospect, met Novak Djokovic for the first time two weeks ago. It was the second round of the Western & Southern Open, in Cincinnati, and also the first time Harrison would face the world’s no. 1-ranked player in a match. “The way I was raised, you can’t really be satisfied until you’re the best,” Harrison told me. “I’m not gonna be happy until I can win Grand Slams and be no. 1 in the world.”

The lights had just come on for the evening’s prime match on the stadium court, a venue Harrison has occupied with increasing frequency this year. Tennis scouts had been eyeing Harrison ever since he was 15, when the Shreveport, La., native became the youngest player in two decades to win a professional match. At Wimbledon, nearly beating David Ferrer, the world’s sixth-best player, increased expectations for Harrison, as did reaching tournament semifinals twice in the previous month. This made Harrison the 78th-best player in the world upon arriving in Cincinnati, one of only two teenagers in the top 100. “I tell him, ‘People want to root for you,'” Scott McCain, his coach, told me before the Djokovic match. “They want another American player to channel their energy to.” Djokovic, a Serbian whose buzz cut and bulging eyes give him a look of controlled mania, had lost one match all year. Harrison, with a sloppy schoolboy cut and eyes blue enough to make Paul Newman blush, still had a losing record as a professional player. And yet, returning serve against Djokovic, the teenager opened the match with a forehand winner. Then another. Two errors from Djokovic and, suddenly, Harrison had broken serve and won his first game against the best player in the world. The cameras panned to his box. Matt Holt, his trainer, clapped, and Ben Crandell, his agent, smiled. McCain remained stoic. Perhaps he knew what was coming.

Harrison lost nine of the next 10 games. The teenager slammed his racket onto the ground after losing his serve, then smashed one ball into the ground and another into the stadium food court after Djokovic broke his serve for the fifth straight time. Midway through the second set, Djokovic sent a backhand winner deep into the corner, putting him up three games to none. Holt looked at the ground and Crandell held his chin in his hands. McCain’s demeanor hadn’t changed. Harrison challenged the call, if only as a break from the onslaught, and watched as an electronic tennis ball sped across the stadium JumboTron. It was in. Knowing as much, Djokovic had already taken his seat. Harrison was left to grab his towel and walk across the court, marching in front of the man who, for now, still held the throne.

When Ryan Harrison first hit a tennis ball, at age 2, American tennis had little need for a future. It was 1994, and the present was in good hands. American men — Pete Sampras, Jim Courier, Andre Agassi — had won nine of the preceding 12 majors; throughout the ’90s they would win 21 of 40 slams. In the same span, no other country produced more than three slam winners. Then, around the time Harrison hit puberty, American tennis lost its stature. No American in the men’s game has won a major since Andy Roddick at the 2003 U.S. Open. At last year’s Open, none of the 15 American competitors made it past the fourth round. “It’s sad out there,” one top American junior coach told me. “There’s just nobody.”