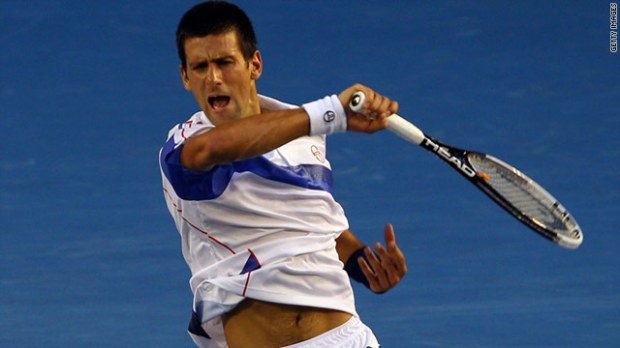 World No.1 tennis player Novak Djokovic is to be presented with a special Centrepoint award by the charity’s patron, HRH The Duke of Cambridge, at the Winter Whites Gala in London’s Royal Albert Hall on Saturday 8th December.

The Centrepoint Great Britain Youth Inspiration Award, founded by Centrepoint Trustee Danielle Alexandra and CEO Seyi Obakin, honours those whose contribution to youth inspires young people across the world and awards their commitment to giving back and eradicating such humankind crises as poverty, health, education, hunger, and homelessness. Djokovic will receive the Premier Inaugural Award.

The Novak Djokovic Foundation raised $1.4 million for early childhood education through its inaugural fundraising dinner in New York in September and a week later he visited the “Beneath the Linden Trees” kindergarten, a UNICEF initiative in Lesnica, Serbia, to raise awareness of the importance of early childhood education. In October, Djokovic collaborated with his clothing sponsor UNIQLO to develop and launch ‘Clothes for Smiles,’ a new program that aims to give children of all ages a chance for a better future. The program has established a $10 million fund that helps nurture the dreams of children worldwide.

Djokovic, a UNICEF ambassador, said: “This is one of the biggest awards I could ever receive because it  recognises the contribution of my Foundation to the lives of young people around the world, which is a big part of our work. Centrepoint is a charity which is dedicated to ending youth homelessness and it it will be an honour to receive this award from the charity’s patron, HRH The Duke of Cambridge.”

Prince William has been Centrepoint’s patron since 2005, continuing his late mother Princess Diana’s work, and proceeds from the night will be donated to Centrepoint to further its work in supporting homeless 16-25 year-olds in the UK.

The Winter Whites Gala will see the Royal Albert Hall, which hosts the Statoil Masters Tennis 5-9 December, transformed into an enchanted Winter Wonderland, featuring some of the biggest names in sport and entertainment.

Tennis greats John McEnroe, Bjorn Borg, Boris Becker, Ivan Lendl and Chris Evert have all confirmed their attendance. McEnroe will play in a doubles match, with Lendl, Borg, Becker and Evert in attendance to lend their support. Goran Ivanisevic and Tim Henman will also clash in a rematch of the 2001 Wimbledon semifinal.

The Winter Whites Gala has been Created and will be Produced by Award-winning Hollywood Screenwriter/Producer, Danielle Alexandra and is presented by Danielle Alexandra Productions in partnership with IMG, the global sports, fashion and media company who own the Statoil Masters Tennis. Together with Centrepoint, they are committed to the support of ending youth homelessness.

VIP ticket-holders to the gala evening will mix with film stars, celebrities and some of the greatest tennis champions of all-time on the white carpet and at a champagne reception, before enjoying an exclusive private dinner in the Gallery, decorated as a magical winter crystal palace. VIP guests will then take their seats in their own private hospitality box to watch a brilliant show featuring a singles tournament match followed by exhibition play. This will be followed by the presentation of the Centrepoint Premier Award for Contribution to the Lives of Youth Across the World to Djokovic.

Founded in 1969, Centrepoint has helped more than 75,000 homeless young people and is dedicated to ending youth homelessness.

In 2009, Prince William slept on the streets of London with Centrepoint CEO, Seyi Obakin, to deepen his understanding of homelessness.

Djokovic finished 2012 as the World Number One for the second successive year. He won the Australian Open title in January, reached the finals of the French and US Opens, and lifted titles at the ATP Masters 1000 events in Miami, Toronto and Shanghai. He ended the year on a high by winning the ATP World Tour Finals in London.

VIP Gala Dinner tickets for the Winter Whites Gala Evening are available. To book or for more information, please go to www.winterwhitesgala.comor call one of our event specialists on 020 8233 5854.

Article from the ATP web site