Is this Hard Courts or Clay? Two French tennis players (Gael Monfils and Gilles Simon play a point with a 71 ball rally).

Some Tweets from other Pro’s during the match:

Can somebody explain me what in the world is going on here???#simon #monfils #australianopen

A Good article on 14 year old Sara Tomic (I think you can figure out who her brother is):

IF SARA Tomic is less ambitious than her big brother, she doesn’t have much catching up to do. She has big ideas: to become the best player in the world, to win grand slam tournaments, to win more of them than Bernard does. Trouble is, she’s still only 14. ”That’s still the plan and I’ll get there,” she said. ”I want to get there so fast, but I have to slow down. It takes time, a lot of dedication, hard work.”

She’s off to a good start. Tomic made it to the quarter-finals of a tournament in Traralgon last week and yesterday won her first-round juniors match at the Open, dropping the first set but talking herself through it. She was pleased she found a way, that she had believed in herself, but soon afterwards her thoughts had turned to something else: getting up into Bernard’s box to watch him play Roger Federer.

judmoo judy murray16h
My kind of tennis court. Made out of icing and chocolate. Sweet. pic.twitter.com/wA2lIw5D 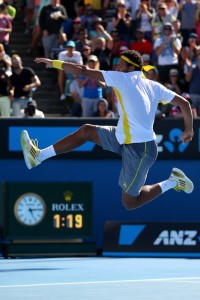