When they were young

An article on what men of the ATP looked like as a kid. Here are two. See the rest – HERE 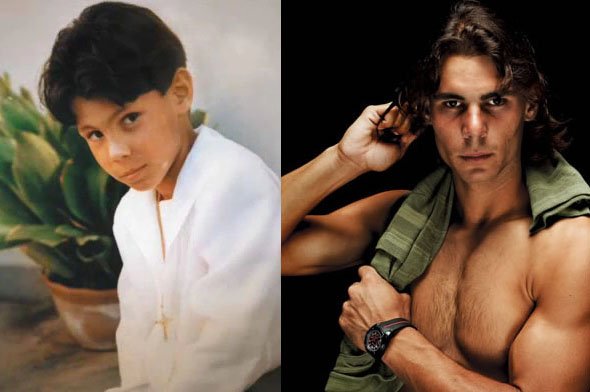 Rafa’s success at Indian Wells has resulted in a lot of Twitter activity.  Here are a few tweets:

If it weren’t for Indian Wells

The Dallas Challenger is the closest thing to a tour event you can have.  It comes at the same time as the Indian Wells tournament.  At this years tournament the average ranking is 103rd which is the best of any challenger tournament ever, while last years event was the second best (109th).  The median ranking – 90 – was also the best ever.  Again, last years tournament was the second best.  Next. look at the 8th seed – Lukas Rosol – ranked 62nd in the world.  No challenger has ever ever had a player with a ranking that low although Lukas Lacko, last years 8th seed was 69th.  According to Heavy Topspin Blog the average Challenger has 1.71 top 100 players, there are 18 top 100 players in Dallas.

The top seed in the Dallas Challenger is Marcos Baghdatis (35th in the world) who retired in his opening round match to Igor Sijsling of Netherlands.  Tennis Abstract picks the winner, out of the remaining quarter finalists as #5 seed Jurgen Meltzer. Tennis Abstract lists the probability for every player left in the draw.  Meltzer comes in at a 22.8% chance of winning.  Interesting enough, there are 3 qualifiers and 2 wild cards left out of the 8 quarter finalists.

Read more about the tournament – HERE

The last in the series of the Women behind the Men of the ATP from “The Tennis Space” blog.

In recent years, she has become Mrs Federer and then a mother, giving birth to twin daughters in 2009. But her commitment to Federer did not slow down one bit; instead she just upped sticks, packed a few extra bags, hired some nannies and continued to accompany her man around the world. In the near four years since they got married, Federer has won four grand slam titles and continues to hang around the very top of the game, winning his record 17th grand slam crown at Wimbledon last summer.

“It is just incredible that she’s willing to make all of that effort. I’m happy that it’s this way, because anything else would make it more difficult to compete and to play at the highest levels. It would basically be impossible.”

Borough residents have had mixed reactions to the USTA’s expansion plans at Flushing Meadows Corona Park since they were first announced last June.

The expansion plan, which will  utilize an additional .68 acre on top of the 42 acres the USTA currently sits on, includes construction of two new stadiums and two parking garages and is in addition to other proposed projects at the park which include a new soccer stadium and retail mall near Citi Field.

Proponents of the tennis center’s expansion, including Mayor Bloomberg and Borough President Marshall, say that the project will be a boon to the local economy while providing additional jobs. The USTA says that the annual US Open tournament creates 6,000 seasonal jobs with about 585 full and part-time positions for Queens’ residents.

“The USTA has created an extremely lucrative business utilizing this public parkland that last year made $ 275 million while giving just $ 2.5 million back to the city,” said Geoffrey Croft, of NYC Park Advocates, a nonprofit group dedicated to improving public parks.
“The USTA is a wonderful organization but the impacts to the park are well known and should not be increased.”

More of the Women behind the Men series with Marat Safin / Dinara Safina‘s Mom and Andy / Jamie Murray‘s mom.

You wouldn’t mess with Marat Safin. And you certainly wouldn’t mess with his mum. Rauza Islanova was a good enough player to be ranked in the top five in the former Soviet Union but it is in her role as coach that she came to prominence, with Safin, his sister Dinara Safina, Anna Kournikova and Elena Dementieva all coming through the famous Spartak Club in Moscow, where Marat’s father happened to be the director. Islanova used to take Marat along to the club when she was working and coached the future world No 1 between the ages of six and 13, before sending him packing to Spain, where facilities were much easier to come by. Famed as a hard task-master, she knew her own mind and was never afraid to speak it.

Needless to say, there were times when he children didn’t listen to her but her track record is second to none. Both Safin and Safina became No 1 and many, many more made it thanks to her coaching and moulding.

Judy, a former Scottish national champion (she was the tartan Chris Evert), did not take kindly to past suggestions by Boris Becker and others that she was too closely involved with Andy’s career. “The apron strings stuff is ridiculous – Andy lives in Surrey, and lived in Wandsworth, South London, for a number of years before that. I have always lived in Scotland. But there are people who really think I travel with him around the world telling him what to do. I only attend six or seven competitions a year. There have been times when I have been around more often, but that has been when he is having a tough time and needs support.”

As Steve Bierley, the former tennis correspondent for The Guardian, once said, “Judy Murray should be held personally responsible for the ills of British tennis; she stopped producing children after she had Andy.”

More Women Behind the Men

“The Tennis Space” Blog is down to it’s #5 and #4 Women behind the Men of the ATP.  #5 Jelena Gencic, Novak Djokovic‘s first coach and #4 is Olga Lendlova, Ivan Lendl‘s mother.

It was back in Kopaonik, Serbia’s most prominent ski resort and the place where the Djokovic family ran a local restaurant, where the two first met; Novak a young boy trying to get the ball over the net and Gencic looking for her next star. As a former national tennis champion (she also played handball for Yugoslavia), Gencic became Fed Cup captain and then as a coach, she discovered Monica Seles and Goran Ivanisevic; now she had a third superstar on her hands.

Olga was fierce. To help you understand Ivan Lendl’s relationship with his mother, Olga, have a flick through back issues of Sports Illustrated magazine. According to one old profile of Lendl, when Ivan was a boy Olga would strike him with her left hand if he talked back, until she broke her wristwatch with one of the blows, and she then had to remember to hit him with her right. Another issue told the story of the time he initially refused to eat his carrots and peas, and so she set a timer for ten minutes and left the room – he knew then to clear his plate. Olga, who was once the second-ranked female player in Czechoslovakia, was always tough on her son. He was just six years old when she told him at the courts: “If you’re going to cry, go home.”

More of “The Tennis Space” Women behind the Men series:

Maryse Gasquet – no one would dispute that Gasquet’s mother, along with his father Francis, have been hugely influential on the Frenchman’s career. If Gasquet’s parents had not been tennis coaches, it is questionable whether Richard would ever have taken to the sport. Or whether he would have appeared, at the age of nine, on the cover of France’s tennis magazine with the caption: ‘Is Richard G the champion France is eagerly waiting for?’ (Though many would suggest that his fame before his tenth birthday harmed him more than it helped him). And would he have such a fabulous one-handed backhand?

Jimmy Connors was a cage-fighter of a tennis player. For that, thank/blame (delete depending on your point of view) his mother Gloria, truly a tennis matriarch. She would urge little Jimmy to “play like a crazed animal”, and “to knock the ball down my throat, and he learned to do this because he found out that if I had the chance I would knock it down his”.

What if you were a big name athlete and you performed in a charity exhibition and never got paid? Well if you are Andy Roddick and that charity not only failed to pay you, but failed to provide the services it is supposedly set up to provide, you sue the organization and if you win the lawsuit, you give the money to a legitimate charity.

The charity Miracle Match Foundation was set to pay Andy Roddick $100,000 for an appearance fee at an exhibition match last September, and while they gave the former U.S. Open two checks for $50,000, both checks bounced and Roddick had to take matters into his own hands.

“I simply expect Miracle Match Foundation to live up to their word and obligations,” Roddick said to Tennis.com. “They have repeatedly had issues paying the participants of their matches and very little of the money raised from these events actually goes to charity. 100% of the money I win in this case will go to the charities, which were originally supposed to benefit from that night.”

Read all about it – HERE

Number 8 on “The Tennis Space” blog list of the Top 10 most influential women on the ATP Tour.  Maria is Rafa’s girlfriend.

“Travelling together everywhere, even if I could, would not be good either for  him or for me. He needs his space when he is competing, and just the idea of me hanging around  waiting on his needs all day wears me out. It would asphyxiate me. And then he  would have to be worrying about me … No. If I followed him everywhere, I think  there’s a risk we might stop getting along,” Perello wrote in Nadal’s autobiography. “The celebrity world is not a world I want to be part of, and I don’t think Rafa would have chosen to be with a woman who looked for that in life.”

Under the Influence of Women – #9

If Denis Istomin thinks he has a tough balancing act to cope with, spare a thought for Mikhail Kukushkin, a Kazakhstan player who four years ago had the nous, some would say bravery, to hire his girlfriend as his coach. Since they began working together, Anastasia Ulikhina has become Kukushin’s wife and her quiet influence has had a positive effect.

Began playing tennis at age six with father Alexander who coached him until age 17…Mother, Tatiana…Has one older sister, Ekaterina…Likes to play on hard courts, best shots are ground strokes…Moved to Kazakhstan in 2008…Has no specific goals in terms of rankings or results but just wants to give his best on the court…Likes movies and reading Russian books…Best friends on the tour are Andrey Golubev and Yuri Schukin…Married to coach Anastasiia Kukushkina (November 19, 2011) who he’s worked with since May 2009.

More about Kukushkin and more pictures at “All About Sports Players” Blog (CLICK HERE):